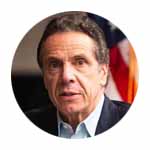 Andrew Cuomo, a career politician and current Democratic governor of New York, has been getting a lot of press lately about a potential run for the 2024 presidency. This, despite his growing COVID nursing home and sexual harassment scandals that have led to many prominent politicians calling for his resignation.

That said, there is no official Andrew Cuomo for President 2024 campaign just yet, and the potential candidate himself said that he isn’t interested in running for the highest office in the land. Of course, that rebuttal isn’t gospel, and many sports bettors are putting money on Cuomo’s Vegas election odds, which have him in the middle of the pack on the 2024 Democratic nominee betting boards.

If you want to bet on Cuomo's Vegas odds, though, you’ll have to do so at an offshore election betting site. These sportsbooks are the only ones legally able to offer political lines, despite Nevada bookmakers releasing “odds” on the general election, Vice Presidential candidates, and so on. Vegas uses these lines to entice bettors to their sportsbooks, but they cannot by law take action on political or entertainment betting outcomes. However, the books listed here can, so cast your votes accordingly!

Is It Legal To Bet On Andrew Cuomo For President?

Yes, it is, provided that you use one of the offshore sportsbooks listed here. These top sites all have Andrew Cuomo odds featured prominently on their boards, and you can place a real-money wager on the New York governor if you think he has a real chance to enter the 2024 race and win.

There are no federal laws barring individuals from betting on politics online with offshore operators, as the Wire Act of 1961 and the UIGEA of 2006 do not go after individual bettors. Instead, these laws target only unlicensed bookmakers operating on US soil and banks that knowingly process transactions to non-US-regulated betting sites.

The sole caveat is that the state of Washington has laws against online gambling in general, and though these are unenforced and many WA residents wager at these sites, we recommend that you stick with all local mandates.

Betting on Governor Cuomo is easy enough once you’ve signed up at any online election odds site. That process, fortunately, is equally simple, and you can join and make your first deposit in just a few minutes, getting in on these lines while the getting’s good.

Andrew Mark Cuomo was born in Queens, NY, on December 6, 1957. In 1971, Cuomo finished his elementary education at St. Gerard Majella’s School, and he graduated from Archbishop Molloy High School in 1975. After that, he attended Fordham University and earned a BA (1979) before getting his law degree from Albany Law School in 1982.

Cuomo married Kerry Kennedy (yes, of those Kennedys) in 1990, and he has three daughters with her, though the couple divorced in 2005. After that, Cuomo dated the Food Network’s Sandra Lee. They lived together until 2019. Cuomo is a Roman Catholic and has one brother, Fredo Cuomo, and one sister, radiologist Margaret Cuomo.

Cuomo comes from a political family, as his father Mario was elected governor of NY in 1982, a campaign on which Cuomo worked. He was a member of his father’s staff and used that position to work his way up the political ladder in the Empire State.

In 1993, Cuomo became a member of the Clinton administration as Assistant Secretary for Community Planning and Development within the Department of Housing and Urban Development (HUD).

In 2002, Cuomo ran for governor of NY but withdrew from the race on the night before the state convention. In 2006, Cuomo ran for NY Attorney General, beating Republican Jeanine Pirro (now a Fox News personality). In 2010, Cuomo ran for NY governor again, this time winning and taking office on January 1, 2011, which is a position he still holds.

Cuomo’s politics are predicated on the standard Democratic party platforms, and he’s considered to be a mainstream moderate Democrat. He supports the typical DNC calling cards:

As for his views on the GOP, Cuomo has expressed disdain for Republicans across the board, saying that “extreme conservatives…have no place in New York” in a January 2017 interview on WCNY.

Is Andrew Cuomo running for President in 2024? Expand

According to Cuomo, he is not interested in running for the Democratic nomination for President of the United States in the 2024 general election.

Before the 2020 election, when the same question was posed to him, Cuomo repeatedly shot down the notion that he was even thinking about running for the post.

Will Andrew Cuomo run for President in the 2024 election? Expand

Despite his protestations to the contrary, there seems to be a good chance that Cuomo will end up throwing his hat into the ring.

Sportsbooks have Cuomo situated in the middle of their odds boards for both the Democratic nomination and the presidency, though his various growing scandals could prove a significant hurdle.

Regardless, Cuomo is a longshot, but it’s possible that the DNC would install him as the nominee if they don't have any better options down the road.

How much could I win if I bet on Andrew Cuomo today? Expand

As of Q2 2021, Andrew Cuomo has Bovada odds of +1600 to get the Democratic Presidential nomination and +6000 to win the presidency outright.

Yes, CNN’s Fredo Cuomo is Andrew Cuomo’s little brother, famous for his on-camera meltdowns, violent outbursts, and nearly infecting his mother with COVID-19. We'd say he's the black sheep of the family, but his Governor brother seems cut from the same exact cloth.

How tall is Andrew Cuomo? Expand

How old is Andrew Cuomo? Expand