When it comes to political betting, it's more than just who wins and who loses elections. Wagers can be made on political prop bets like how many times a candidate will say a specific word, how active Twitter might be during a debate, whether the current President will be impeached, and so on.

As former President Donald Trump faced impeachment twice (Dec. 2019-Feb. 2020 and again in January 2021), many online sportsbooks like what they see with this new trend, especially from a betting perspective. That's why the top betting sites – having moved on from Trump impeachment odds – are now embracing Joe Biden impeachment odds.

Since impeachment can be a long process with multiple steps, bettors have plenty of chances to capitalize on such proceedings. And since such proceedings are primed to arise many more times in the future, you can expect impeachment odds to be a semi-regular thing going forward. Decorum, once lost, is gone forever, as the poet says.

Impeachment probabilities can also affect other prop bets and betting lines, as they did for the odds for which party would control the White House after the 2020 election or whether or not Republicans would remain in control.

There are no federal laws that make it a crime to place bets on a Presidential impeachment. As long as the wagers are made through licensed offshore sites operating legitimately within the industry, the bets are legal. Bettors can also put money on Presidential resignation odds, Donald Trump's 2024 election odds, candidate matchup odds, and a variety of other related political prop bets.

Unfortunately, no domestic sportsbooks offer action on impeachments, even in Vegas. However, Vegas oddsmakers still set impeachment lines as marketing gimmicks to get bettors interested in gambling. Only offshore sportsbooks can legally take action on real-money impeachment odds and related prop bets.

How To Bet On Presidential Impeachment Odds

Betting on impeachment is no different than betting on any other types of Vegas election odds. Domestically, gamblers can't wager at any in-state books, so players are required to do so at offshore sportsbooks. Fortunately, it's a simple process to get started.

To bet on impeachment, an account must first be made at your preferred election betting site. This takes only a few minutes, especially if you deposit using Bitcoin or credit/debit. Once your account is ready, impeachment betting odds can be found under the “Political” tab. Impeachment odds might also be listed in the “Specials” section or "Entertainment" section of your betting site of choice.

Each of the online sportsbooks listed on this page features a number of security protocols to ensure player safety. Not only does every book here employ SSL/TLS data encryption, 24/7 customer support, and cryptocurrency options to create a safe environment for all bettors, each one is also licensed and regulated by legitimate gambling authorities.

What are Biden's impeachment odds?

Each sportsbook sets its own odds, so the chances that Biden is impeached may differ between oddsmakers. The following is a list of current impeachment odds from multiple different books, though these are not always going to be available:

What year will Kamala Harris become US President?

What year will Kamala Harris become US President?

As you can see, some Vegas election sportsbooks occasionally offer odds on Biden impeachment. While these lines are popular, we advise taking the "No" when you come across them. It's true that Biden clearly isn't mentally or physically fit enough to hold the office of US President for long, but that's no crime. Maybe.

Further, it's not at all likely that "Big Guy" Biden and son Hunter will be investigated or prosecuted for their involvement in the Ukrainian Burisma energy scandal, given that those details were already well known when the DNC chose Biden as its candidate in 2020.

Biden will likely step down at some point, but he won't be impeached or removed via the 25th Amendment. The Democrat Party – and its complicit mainstream media arm – will have to present the forthcoming Biden resignation as voluntary and dignified.

As we suspected, Trump – win or lose – was indeed impeached again. While Trump impeachment news hit a fever pitch following the protests in Washington DC on January 6, 2021, the real reason the left impeached Trump in hopes of a Senate conviction is so the former President could not run again in 2024. Trump is, after all, the current betting favorite to win the GOP nomination in the next election.

During the second round of Trump impeachment proceedings, you could can find betting odds on whether or not the Senate would find him guilty of the phony charges for "inciting riot" and other such rot. You could also bet on political props like the exact number of Senators to vote for conviction. Bettors who knew that the President would not be impeached won big, as the Senate voted to acquit.

After the very controversial and suspicious 2020 general election, the mainstream media falsely asserted that then-President Trump "incited violence" by calling for a peaceful, lawful, constitutionally protected protest on Capitol Hill for the January 6 validation of the 2020 electoral college votes.

There was some limited violence at the 500,000-person protest, and though Trump disavowed such actions, the motive was to paint him as the chief culprit so he would not be able to run for public office again.

The 2021 Trump impeachment trial was all about the desperation of the left, and it was an attempt to remove "Trumpism" (i.e. national populism, or the MAGA Movement) from the public discourse. It didn't work, of course, as every Trump impeachment poll showed the move to be highly unpopular. At least we got some decent Trump impeachment memes out of the whole thing, though.

How does impeachment work?

Impeachment proceedings include a few key steps that must be followed by Congress to legally remove a president. 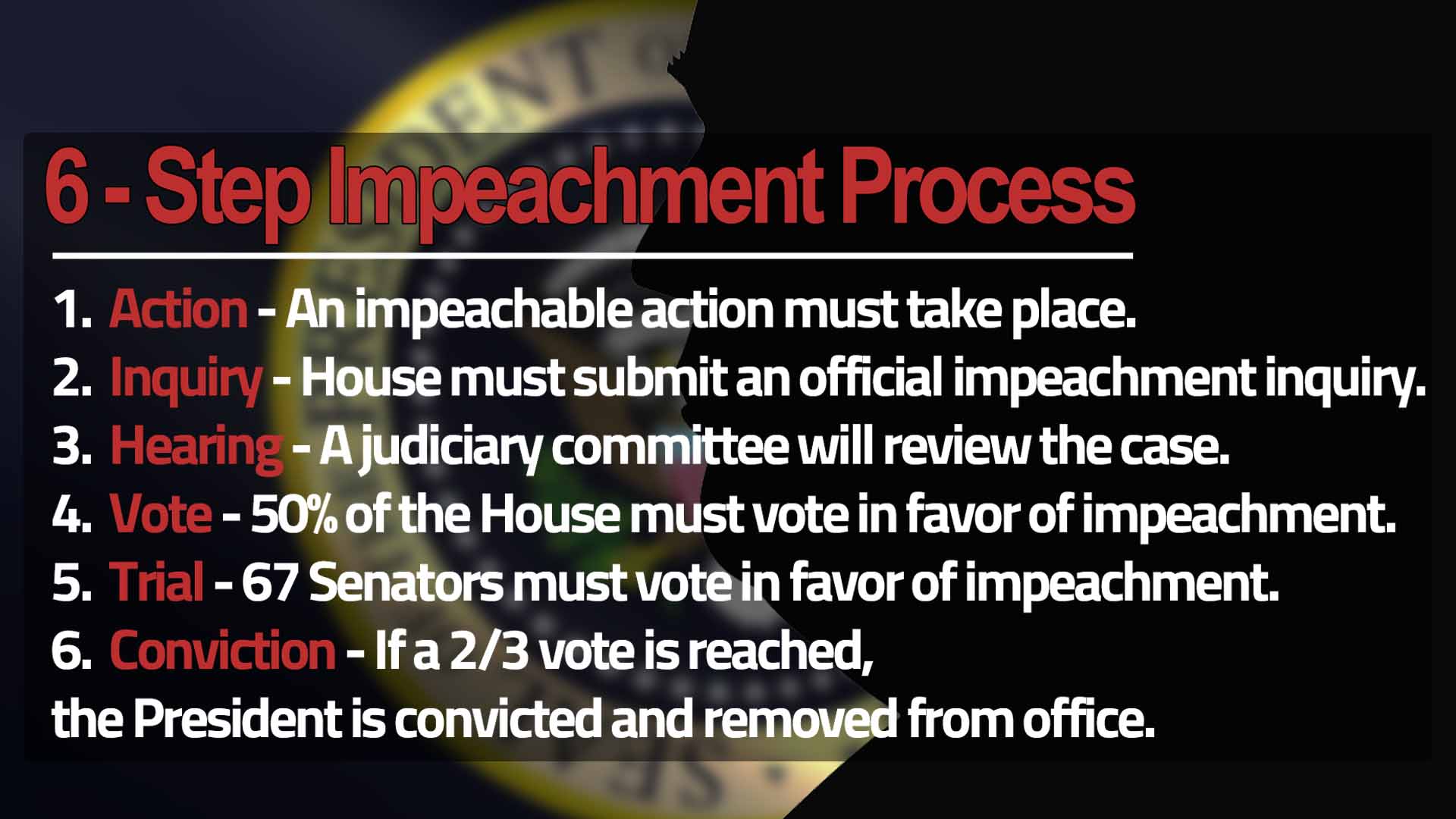 What other presidents have been impeached?

Before Trump, only two former presidents have ever been impeached, although a third narrowly avoided impeachment by resigning.

In December 2019, Donald Trump was impeached, but after a six week process, the Senate found him not guilty and he was acquitted. In Trump's case, impeachment had a positive effect on both his polling and re-election odds. Trump was impeached for a second time in January 2021, making him the first US President to be impeached twice. Trump was not convicted by the Senate on either occasion.

In 1974, impeachment proceedings were also initiated against Richard Nixon related to his involvement in the Watergate Scandal, but he stepped down as President before he could be convicted of Obstruction of Justice, Abuse of Power, and Contempt of Congress.

The volatility of political odds is unpredictable, especially with something as uncommon as Presidential impeachment.

That said, you can expect that impeachment is never going to be a real risk for any sitting President when his or her party controls the House of Representatives.

How long is the impeachment process? Does Vegas accept bets the whole time? Expand

Impeachments have no set timeline.

As for the acceptance of bets, Vegas sportsbooks can't actually take your money on impeachment odds, which means you'll have to stick with offshore political betting sites. You can usually find impeachment betting lines and related prop bets for the entire duration of the House impeachment and Senate trial.

Will Donald Trump be impeached for a third time? Expand

After all, Trump was impeached for a second time after he was no longer President, which means that the precedent has been set for former politicians to be impeached ad infinitum.

Since the left is desperate to permanently ban Trump from holding public office, they may attempt to fabricate new crimes for which to impeach him.

If Trump wins back the presidency in 2024 and the GOP controls the House, of course, he will likely not be impeached during that time.

BetOnline Posts New Props, But Chauvin Odds Are Nowhere To Be Found

April 8, 2021 Comments Off on BetOnline Posts New Props, But Chauvin Odds Are Nowhere To Be Found

March 31, 2021 Comments Off on Gaetz Gets In Trouble, Biden Mental Fitness Test Off Vegas Betting Boards

March 24, 2021 Comments Off on Biden Press Conference Odds Emerge As Basement Joe Comes Up For Air