46th President Of The United States, Former Vice President And US Senator For Delaware 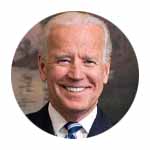 After serving as a local county council member in DE, Joe Biden was elected as a US Senator for Delaware, a seat he would hold for the next 35 years. Biden became a recognizable face on the national political scene when he ran for President in 1988 before exiting the race to make way for eventual Democratic nominee Michael Dukakis.

Biden entered the race to become the Democratic nominee for President once again in 2008, eventually withdrawing from the race and becoming the running mate of winner Barack Obama. From there, he served as the Vice President of the United States of America from 2009-2017. Following his tenure as the VP, many Democratic voters assumed he'd run for office in 2016 and were disappointed when he elected not to.

Before the 2020 Presidential election, Joe Biden was atop the democratic odds boards to win the nomination and give Donald Trump a run for his money in the 2020 November general. Biden promised to pick a woman Vice President running mate, which he did with the selection of Kamala Harris. On November 4, 2020, Joe Biden was declared the 46th President of the United States. Currently, Biden is also among the favorites to win the presidency in 2024.

You can wager on the 2024 Joe Biden odds at any top offshore sportsbook that offers election betting, and you'll want to shop around for the best possible payouts. You can also bet on Joe Biden impeachment odds, which are trending of late.

Biden Approval on May 1st?

Is It Legal To Bet On Joe Biden?

Yes, It is legal to bet on Joe Biden and election outcomes as long as you do so with an online sportsbook operating legally offshore. Vegas itself does not offer odds on entertainment betting or political outcomes (even though they release “unofficial” betting lines for marketing purposes), so that leaves offshore sportsbooks as the only option. US gaming laws do not prohibit wagering on political outcomes in other countries.

Washington state has enacted laws that forbid online gaming in all of its forms. We’ve yet to hear of anyone being prosecuted for online betting in WA, but we recommend familiarizing yourself with your local gaming laws and sticking to your state’s rules and regulations.

How To Bet On Joe Biden?

Las Vegas sportsbooks have traditionally refrained from offering odds on entertainment markets, the category that political outcomes fall under. Other domestic sportsbooks have followed Vegas's example, leaving only one option to win money on Joe Biden betting odds inside of the United States: trusted offshore sportsbooks operating online. And since you can’t wager with an online sportsbook without depositing funds, here's how to get started:

He matched up more favorably against Donald Trump than any other Democratic candidate (and was actually out in front according to polls and odds boards), so the third time was indeed the charm for Biden to defeat all candidates for the 2020 Presidential Election and win the White House.

Joe Biden was a prominent presence in DC politics for 34 years before leaving office as Vice President in 2017. Biden has belonged to the Democratic party for his entire political career and has served as US Senator of Delaware and Vice President of the United States.

2020 marked the third time that Biden had run for President. After a 2020 Super Tuesday shocker where Biden unexpectedly dominated at the ballot box, he rode that momentum (and some obvious vote counting shenanigans) all the way to the White House.

What was the focus of Joe Biden's 2020 Campaign?

A longtime moderate Democrat, Joe Biden aimed to restore the United States to its pre-Trump glory (or something). He felt that Trump made many errors on a global scale that, if left unchecked, had the potential to create long-term damage to the country. His message was focused on the following concepts.

Biden wants to create an economic climate in the United States that is advantageous to the middle class. Under Biden's plan, middle-class families should have the financial capacity to own their homes and provide for their children's secondary education.

Biden believes that Donald Trump has embarrassed the United States on the world stage, and he intends to restore integrity to the office of President. Biden aims to repair relationships with other world leaders and to once again establish the United States as an example for other countries to aspire to.

Biden intends to foster an environment in the United States that is inclusive to all peoples. This includes lessening the impact and influence that companies and individuals with big money can wield. All voices are critical when discussing the issues, not just the opinions backed by financial interests.

This became a foundational Biden platform only recently, after the BLM and Antifa movements that have collectively become known as the 1619 Riots. Biden has expressed solidarity with protesters and rioters, and he has publicly stated his goals to "redirect" police funds, leaving those in the communities hardest hit by the riots wondering exactly how far the rhetoric goes.

Part and parcel of the movement to eliminate police from America is the tilt towards Bolshevik-style communism. Bernie Sanders was reviled within the Democratic Party for his open socialist policies, and Biden bounced him from the primary largely due to his middle-of-the-road status.

But since the 1619 Riots and the coronavirus lockdowns, Biden has been cheerleading for most of the same things Bernie did, including free government housing, free government schooling, free government health care, universal basic income, and just about any other talking point from the radical left. Sanders said of Biden that, if the latter is elected, he would be "the most progressive President since FDR."

What's the deal with the Joe Biden "You ain't black" comment? Expand

On May 22, Joe Biden appeared on The Breakfast Club to do an interview with host Charlemagne tha God. At the end of the interview, after being invited back later to answer more questions, Biden got defiant, telling Charlemagne:

"If you have a problem figuring out whether you’re for me or Trump, then you ain’t black."

After first claiming the statement was a joke, Biden half-apologized, blaming Charlemagne for being a "wise guy." The media was quick to cover for Uncle Joe, but it sure seemed like his "Deplorables" moment.

Regardless, in the end, the election was decided via other avenues, and Biden came out of the scandal unfazed.

When should I bet on Biden to win the election? Expand

We advise waiting a bit.

While you can find Vegas election odds for Biden 2024 right now, the likelihood of such a campaign even existing is slim to none. That means the odds will pay out more later on.

Currently, Biden is showing all the signs of a one-term "President," and the best Biden bets right now are on which year he'll step down or otherwise be forced out of office before 2025.

What Are The Vegas Odds That Joe Biden Will Win The Election IN 2024? Expand

His odds should lengthen a bit in the future, so now’s not necessarily the best time to bet.

Did Joe Biden Serve In The Military? Expand

Joe Biden was in law school when he received a draft deferment based on his student status. Due to an asthma condition, Biden was later reclassified by the draft board as physically unfit for service.

How Old Is Joe Biden? Expand

Joe Biden is 78 years old and set the record for the oldest President ever elected to their first term, beating the record set by Donald Trump of 70 years old in 2016.

Where is Joe Biden from? Expand

How many times has Joe Biden run for President? Expand

What did Joe Biden’s son do? Expand

Biden’s youngest son, Hunter, was the alleged subject of a telephone call between Donald Trump and Ukrainian President Volodymyr Zelenskiy. President Trump was impeached by the US House largely based on the assumption that he asked Zelenskiy to investigate Hunter Biden for improper business deals in the Ukraine while Joe was VP.

There has been significant evidence produced against the Biden family regarding wrongdoing in the Ukraine and in China, though these did not impact Biden's chances to win the 2020 election.

How Much Is Joe Biden Worth? Expand

Joe Biden’s net worth is approximately $9 million. A majority of his fortune was earned following his political career through speaking engagements and royalties from book sales.

What’s the story with Joe Biden and Corn Pop? Expand

Back in 2017, Joe Biden was giving a speech at the renaming of a park in Wilmington, Delaware.

For a few minutes, the speech diverted to a description of an encounter with a straight-razor wielding individual by the name of Corn Pop.

This alleged confrontation occurred in 1967 when Biden worked as a lifeguard at a pool that was mostly attended by black swimmers.

The full speech is below, with the Corn Pop segment beginning at the 2:45 mark. Biden also mentions his leg hair and says that the pool was where he "learned about cockroaches," whatever that means.

It is unlikely that Biden will run for President in 2024, though it could be possible if he makes it through his first term with a solid approval rating and has the energy to campaign for a second term.

How tall is Joe Biden? Expand

Although not quite up to the standard set by Abraham Lincoln at 6’4”, Biden stands at six feet tall.

There is no credible evidence that Joe Biden is, or ever has been, mentally ill.

Some of the comments he has made in speeches in the past have caused many critics to question his mental status, but these comments alone are not an indicator of any potential psychological issue.

That said, Biden does have documented brain damage as a result of two aneurysm surgeries in 1988, and his recent speech patterns and flubs indicate some age-related cognitive decline at the very least.