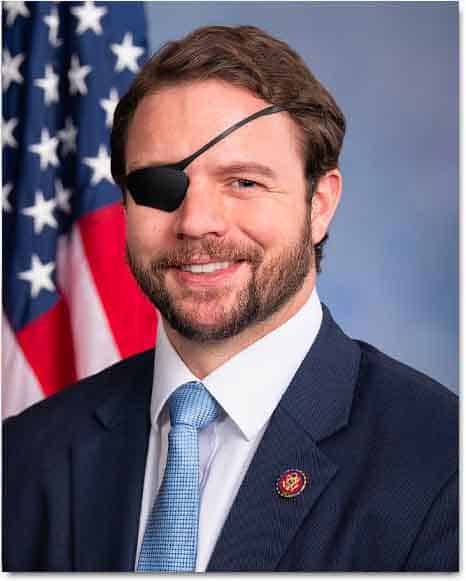 Most Recent Election: GOP Rep. Dan Crenshaw won his reelection bid to the US House (TX 2nd District) in November 2020, defeating Democrat Sima Ladjevardian 55.6% to 42.8%. Crenshaw spent $11 million on his campaign, which was one of the most expensive in the nation.

US House Representative Dan Crenshaw was largely unknown before 2018, having served for over a decade in the Navy between 2006 and 2016. However, after losing an eye as a member of SEAL Team 3, he turned his attention to politics, won a seat in the US House of Representatives in 2018, and never looked back. While the Vegas election odds for Dan Crenshaw have been strong since his very first race, his popularity has waned in recent months after a series of unforced errors alienated his constituency.

Nevertheless, Crenshaw’s reelection chances to the House are high, though talk of his election odds as a possible Presidential candidate – and the early feeling that he was the potential face of the Republican Party going forward – has simmered down considerably. Many MAGA Republicans and fans following Donald Trump election odds have turned on Crenshaw, who seems to be more establishment-friendly than most voters – and bettors – originally thought. Though Crenshaw for President is trending and you can bet on his chances at the best election gambling sites, he’s decidedly middle-of-the-road and middle-of-the-pack.

In Texas, where Crenshaw currently represents the 2nd District in the US House, the odds that the congressman will win reelection are high. In fact, they’re so high that no online betting site currently carries Crenshaw’s US House reelection odds. Of course, it’s still early, as his 2022 reelection campaign hasn’t taken off yet, and the race is more than a year out from being decided.

That said, you can still wager on various betting lines relating to the House of Representatives, and given the importance of the balance of power in the lower chamber (particularly for the GOP, which only needs to pick up a handful of seats to take back control), every House race is impacted by every other House race.

So if you think Crenshaw’s going to take it to the House for a third term in office, you should pay close attention to all the lines available at the most reputable political betting sites, whether they include Crenshaw odds or not.

Trump elected to US House at 2022 Midterms?

Trump to become Speaker of the House after 2022 Midterms?

Earlier in his career, Crenshaw made waves by presenting himself as stern, eloquent, expert debater. A number of analysts and pundits viewed his future as a bright one, especially when discussing his potential candidacy for US President. Behind his signature eye patch and the approval of the veteran set, Crenshaw – a former lieutenant commander – demanded attention everywhere he went.

However, things took a turn in the latter half of President Donald Trump’s first term, and Crenshaw – once viewed as decidedly MAGA-friendly – instead aligned himself with the RINO establishment (much to the chagrin of early advocate Tom Cotton, who helped get Crenshaw elected in the first place).

Among Crenshaw’s missteps are his avowed support for anti-gun red flag laws, his outspoken alignment with disgraced Never Trumper Liz Cheney, and his recent statement that Trump “lost” the 2020 election fair and square. These positions have seriously damaged his reputation.

Naturally, bettors have taken notice, which is why a Crenshaw presidency is now in longshot territory. Yes, he’s on the boards, but he’s currently far from a credible candidate.

Is It Legal To Bet On Dan Crenshaw Election Odds?

Yes! If you have your eye on the political betting boards but aren’t sure if these sites are legit, you can relax: They are, and it is 100% legal to bet politics online if you live in the United States, provided you use a reputable and established overseas sportsbook. The venues we recommend take players aged 18+ from sea to shining sea, and joining is fast and easy.

That said, residents of the state of Washington cannot legally gamble over the Internet. And while nobody from WA has ever gotten in trouble for doing so, you’re advised to follow all local gambling laws and mandates.

How To Bet On Dan Crenshaw Election Odds Online

You can bet on Rep. Crenshaw’s reelection chances and Presidential election odds at any online sportsbook listed in this guide. Regardless of the site (or sites) you join, the sign-up process is identical. Here’s what you need to do:

Through his last election, Dan Crenshaw has been on an upward trajectory politically. Though a Texas transplant, he looks the part of a Lone Star State native, and much of his early messaging resonated with TX voters.

However, the 2022 Crenshaw election should bring him back down to earth, as many constituents feel he’s since gone in a more centrist direction and has turned his back on Trumpism and the MAGA movement. He almost certainly won’t lose re-election, but he’s going to have a fight on his hands, and it’s currently unknown how many allies Crenshaw has in the House.

Daniel Reed Crenshaw was born March 14, 1984, just one day shy of the Ides of March (which is unfortunate, because “Ides” sounds like “eyes,” and the pun potential would have been incredible had Mrs. Crenshaw held out just one more day).

While Crenshaw was born in Aberdeen, Scotland, he’s eligible to be President because his father and late mother were both American citizens. Crenshaw attended high school in Bogota, Colombia, graduating from Colegio Nueva Granada in 2002. He is fluent in Spanish.

After graduation from high school, Crenshaw moved back to the US, where he attended Tufts University in Massachusetts. There, he earned a BA in international relations, minoring in physics.

Crenshaw joined the US Navy in 2006 and qualified as a SEAL in 2008, eventually reaching the rank of lieutenant commander. After five tours of duty in Iraq and Afghanistan, Crenshaw – who lost his right eye to an IED explosion during his third deployment in 2012 – retired from the service.

In 2017, Crenshaw received a Master of Public Administration degree from Harvard and immediately began his political career.

Before 2018, Crenshaw had no political experience outside of the heavily political military power structure. While that knowledge is valuable for elected representatives, it doesn’t necessarily amount to much on the bureaucratic side of things.

Of course, with about three years as an elected rep under his belt, Crenshaw isn’t totally wet behind the ears, either.

While Crenshaw started out as a sort of traditional Republican hardliner, he has since betrayed his various oaths in supporting Democratic pet causes like red flag laws for gun ownership and characterized the January 6 capitol protest as a “riot.”

He further went on to claim that there was no fraud in the 2020 general election, and he defended RINO Liz Cheney for voting to impeach Trump over his alleged “part” in said “riot.” Otherwise, he maintains the typical mainstream RINO bona fides:

Of the six Republicans in the ad, four went on to win: Crenshaw, Van Duyne, Gonzalez, and Pfluger. However, both Hunt and Collins lost their races by several percentage points.

Check out the ad below. We have to admit, it’s pretty good. We’re simply not convinced that Crenshaw the politician is as smooth and gritty as Crenshaw the (short) movie star.

Who is Dan Crenshaw? Expand

Dan Crenshaw is a Republican politician serving as a US House Representative for Texas’ 2nd congressional district.

He is also a military veteran, having served in the US Navy.

How old is Dan Crenshaw? Expand

Although he was born in Scotland, Crenshaw was born to American citizen parents.

Because of this, he meets the “natural-born” requirement for the US presidency.

How did Dan Crenshaw hurt his eye? Expand

Dan Crenshaw lost his right eye while serving in Afghanistan.

The injury was caused by an IED explosion that destroyed Crenshaw’s right eye and impaired the vision in his left eye.

Does Dan Crenshaw have family? Expand

Yes. Dan Crenshaw has extended family, though he and his wife have not had any children.

Who is Dan Crenshaw’s wife? Expand

She is a social activist and political personality.

How are Dan Crenshaw and Ilhan Omar related? Expand

Dan Crenshaw criticized Rep. Ilhan Omar for her comments on the 9/11 attacks in New York, when she characterized the attack thus:

“Some people did something.”

Although Omar claims her statement was intended to reprimand the anti-Muslim sentiments that grew post-9/11, nobody’s buying that nonsense.

How are Dan Crenshaw and AOC related? Expand

Dan Crenshaw and Alexandria Ocasio-Cortez have been in headlines together several times over the past few years for their ideological head-butting.

Is there a Dan Crenshaw SNL episode? Expand

While Dan Crenshaw never appeared on SNL, actor Pete Davidson made a joke about the representative on “Weekend Update” that was deemed offensive.

Here’s what Davidson said about Crenshaw:

Davidson later apologized for some reason.

Yes. Dan crenshaw served on SEAL Team 3 while in Afghanistan and was later promoted to lieutenant commander.

When was Dan Crenshaw’s surgery? Expand

Dan Crenshaw underwent eye surgery in April 2021 when the retina in his left eye began to detach.

Crenshaw is a mainstream establishment Republican.

What is Dan Crenshaw’s religion? Expand

Dan Crenshaw is probably not gay, as he’s married to a woman.

But then again, so is Charlie Crist.

What is Dan Crenshaw running for? Expand

Dan Crenshaw will likely run for re-election in the House of Representatives in 2022, though much speculation has focused on a potential Presidential bid in 2024 or beyond.

There are currently no US Senate odds for Rep. Crenshaw.

Does Dan Crenshaw have a book? Expand

Dan Crenshaw authored the book Fortitude: American Resilience in The Era of Outrage.

He also runs a faith-based podcast called Hold These Truths.

Yes. Dan Crenshaw goes by “Congressman Dan Crenshaw” on his Facebook page and uses the same handle as his Twitter (@RepDanCrenshaw).

Dan Crenshaw has not formally announced a Presidential bid, though rumors persist that he may run for the nation’s highest office someday.

Tuesday Primaries: Plenty Of Trump Endorsements But No Betting Odds

June 6, 2022 Comments Off on Tuesday Primaries: Plenty Of Trump Endorsements But No Betting Odds