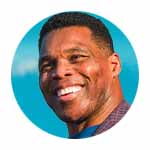 If you’re going to run for election, it might help to have extensive experience as a running back. At least, that’s what Georgia Bulldogs legend Herschel Walker is counting on. And according to the Vegas election odds for Herschel Walker’s US Senate bid in GA, he’s exactly what he’s used to being: the frontrunner among all political candidates in the race.

Walker, a Republican, is hoping to use his professional and personal ties to President Donald Trump to unseat GA Senator Raphael Warnock, who “won” the Georgia Senate special election runoff in 2021. Whether Walker can pull off the “upset” (he feels like an underdog even though he’s the current betting favorite) remains to be seen, but the best online election sportsbooks are all taking bets.

Herschel Walker Chances For Election To The US Senate

The calculus behind the Hershel Walker for Senate campaign appears to be fairly simple – if fairly disingenuous. The Georgia GOP thinks that its best shot to unseat Raphael Warnock in the 2022 Midterms lies with a black candidate of its own.

But why Herschel Walker? After all, he has no political experience save for his Trump-appointed position as co-chair of the President’s Council on Sports, Fitness, and Nutrition. What makes him “qualified”?

Well, Walker has a few things going for him. First, he’s a former Georgia Bulldog considered by many to be the greatest running back in NCAA history. Secondly, he has close personal ties to The Donald himself. Thirdly – albeit this occurred after Walker declared his run for Senate – Georgia just beat Alabama to win the CFP National Championship. Walker is riding high on several waves right now.

Meanwhile, on the strength of his minority status and popularity in the region, Walker is a “credible” candidate according to the odds.

Is It Legal To Bet On Herschel Walker For Senator?

Yes, online election betting is totally legal if you live in the United States. The only caveat is that you can only place your wagers with a reputable Vegas-style sportsbook located outside of USA borders.

No domestic book can legally take bets on elections, so if you see locally advertised Vegas election odds, these are just “hypothetical” lines to get you signed up. For real political bets online, all the sites we recommend here are safe, legal, and legit.

Note: If you live in Washington state, local laws preclude you from all forms of online gambling, including betting on Herschel Walker and other politicians. This law seems to be unenforced, but you should always defer to local rules and regulations.

How To Bet On Herschel Walker Senate Election Odds

The only real trick to betting on Hershel Walker’s chances to win election to the US Senate is that you actually need to be confident in – or against – his actual US Senate odds. Well, that and a membership at one of the Vegas political sportsbooks recommended here.

Of course, we can’t really tell you how to bet on Herschel Walker, as we’re not all that convinced the guy can really pull it off. He does have some skeletons in his closet, and you better believe the Democrats will go to town on those.

But we can help you sign up and get set up to bet real money on elections online. To do that, here are the plays you’ll need to run:

Herschel Walker’s career in politics is mostly non-existent. In 2014, Walker participated in an advertisement supporting Jack Kingston for Senate, and he again came out in support for Brian Kemp for Governor in 2018.

More notably, perhaps, is that Walker is a staunch and outspoken supporter of Donald Trump, speaking for the President at the 2020 Republican National Convention (RNC).

Walker is also the co-chair of the President’s Council on Exercise or Something. Trump appointed him to the post in 2018, and – amazingly – Sleepy Joe Biden hasn’t yet replaced him.

Herschel Walker was born on March 3, 1962, in Wrightsville, GA, to parents Willis Walker and Christine Walker. As one of seven children, Walker’s big-family blue-collar roots allegedly gave him the grit and determination to overcome his youthful obesity and speech problems.

By the time he entered high school, Walker was a three-sport athlete competing in football, basketball, and track. He led the Johnson County High School Trojans to their first football state championship before graduating as valedictorian.

Walker then played college football at the University of Georgia, earning three All-American selections. Walker set numerous school and NCAA records won a national championship in 1981 and won the Heisman Award in 1982.

After three years of college, Walker left school to join the United States Football League instead of waiting to enter the NFL draft. Walker, with the New Jersey Generals, led the USFL in rushing in 1983 and 1985. During this time, Donald Trump took over ownership of the Generals, and the two became lifelong friends.

In 1985, Walker made his way to the NFL, but after a couple of standout years with the Dallas Cowboys, he was traded to the Vikings in 1989. He would go on to also play for the Eagles, the Giants, and the Cowboys for a second time, never winning a Super Bowl.

It’s largely acknowledged that had he gone straight into the NFL instead of “wasting” four years in the AFL, Walker would have been a surefire NFL hall of fame candidate. (Today, he’ll have to settle for a less-surefire Georgia Senate candidate.)

Since 1999, Walker has owned and operated a chicken processing plant, which remains in business to this day. Walker has also been an MMA fighter (kickboxing), ballet dancer, taekwondo practitioner, and bobsledder during his sporting career.

Walker’s personal life has been tumultuous. In 2022, his wife of 19 years – Cindy DeAngelis Grossman – divorced him, citing numerous domestic abuse allegations. Walker even had his gun rights temporarily rescinded by the court as a result.

During divorce proceedings in 2001, Walker was diagnosed with dissociative identity disorder (DID), which is a condition previously known as “multiple personality disorder.”

In his memoir Breaking Free: My Life with Dissociative Identity Disorder, Walker claims to have had around 12 different personalities, or “alters.” Whether or not this would entitle him to 12 different votes on every Senate measure remains to be seen, but that would be a huge win for the right. Unless, of course, most of those identities are Democrats...

It’s tough to get a firm handle on the politics of Herschel Walker, primarily because he’s never held elected office. He’s a Republican, yes, but exactly how Republican is he? Is he a RINO? We don’t really know.

Presumably, Walker is more MAGA than not, as he carries the stamp of approval of Donald Trump. Still, many Georgia GOP insiders are wary of Walker, given that his positions on multiple important party issues remain a mystery.

The “Issues” section of the Herschel Walker campaign website includes some the following, while other noted positions have been extrapolated from his various public comments: