Vegas Election Odds For Marco Rubio – 2022 And Beyond 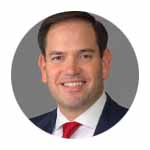 Most Recent Election: Republican US Senator Marco Rubio won reelection to the upper chamber in 2016. Rubio easily defeated Democrat challenger Patrick Murphy by over 700,000 votes, 52% to 44.3%.

Senator Marco Rubio is the senior US Senator from Florida, and he’s held his seat since being elected to the upper chamber in 2010. With his latest win coming in 2016, it’s now time to bet on the Vegas odds for Marco Rubio in 2022. While Rubio’s the heavy favorite to win and there don’t seem to be any potential senate candidates to take away his seat, there are several other Rubio odds on the boards at the best Vegas political betting sites.

Rubio, a Cuban American, is a popular figure in Florida, and even though he’s considered to be a lock for reelection, you can also bet on his Vegas Presidential election odds. Rubio’s actually run for President before, losing bigly on the Presidential debate stage to eventual nominee Donald Trump. But nobody knows if Trump’s running in 2024 yet, and if he doesn’t, that could open the door for “Little Marco” to make big moves.

Senator Marco Rubio is running for reelection in 2022, and he’s overwhelmingly favored to win a third term to the US Senate this November. However, US Senate elections are always heavily contested, and there’s a small chance that a real contender from the left could show up.

That said, some insiders believe Rubio’s bigger challenge may come from the right during the FL Senate primary, but that seems pretty unlikely. While most Vegas election sportsbooks don’t have Rubio listed by name, they do have FL election odds for the 2022 Midterms. Since Sen. Rick Scott (R) isn’t up for reelection in FL until 2024, the following GOP line implies a Rubio win.

Rubio should have no trouble winning reelection to the United States Senate, but whether or not he has a real shot at winning the 2024 Presidential race is another matter entirely. Rubio ran in 2016 against Trump, and he didn’t fare well against the GOAT.

Of course, nobody else did either, and many GOP Presidential candidates from 2016 have fared far worse politically than Rubio since that time. For the most part, Little Marco has remained relevant and popular in his home state.

Is It Legal To Bet On Marco Rubio?

Yes! While you cannot legally bet on political odds, current event odds, or entertainment odds at domestic US sportsbooks, there are no US gambling laws against placing such wagers with established, reputable offshore sportsbooks. As long as you’re at least 18 years of age, you can bet on Marco Rubio odds – and all other political futures and political prop bets – with confidence.

Note: Residents of Washington State are not allowed to bet over the Internet. While this law is historically unenforced, we advise you to follow all local WA gaming mandates and bet on elections online only at your own risk.

How To Bet On Marco Rubio’s Reelection Chances Online

If you want to bet on Marco Rubio for Senate or Marco Rubio for President, the only way to do that is by making an account with a trusted offshore betting site that offers Vegas election odds.

Remember, domestic USA sportsbooks – even the best sportsbooks in Vegas itself – are not legally allowed to take real-money bets on elections and politics. The sites recommended here are all legal and safe to use for US residents aged 18+, and getting started is fast and easy:

Marco Antonio Rubio is the current senior US Senator from Florida. Rubio, a first-generation Cuban American, was born in Miami, FL, on May 28, 1971, to parents Mario Rubio and Oriales Rubio. Rubio is a natural-born American citizen, while his parents were naturalized in 1975. Rubio has three siblings and was baptized Catholic.

In the late 1980s, Rubio attended South Miami Senior High School, where he graduated in 1989. From there, he enrolled in Tarkio College (Missouri) for a single year on a football scholarship before transferring to Santa Fe Community College in Gainesville, FL. There, Rubio graduated with an AA before earning his BA in political science from the University of Florida (UF) in 1993.

Rubio then attended the University Miami School of Law, earning his JD in 1996. During his stint in law school, Rubio got his first taste of the political life when he interned for US House Rep. Ileana Ros-Lehtinen. He also worked on Bob Dole’s 1996 Presidential campaign.

In 1998, Rubio was himself elected to his first public position as city commissioner for West Miami. From there, he was elected to the FL House of Representatives before being elected to the US Senate in 2010. Rubio has also been a professor at Florida International University (FIU) since 2008.

Earlier in his career, Rubio was considered a rising star in the Republican Party, albeit others have now taken that status. These GOP hotshots include the likes of Fl Gov. Ron DeSantis, AK Sen. Tom Cotton, and MO Sen. Josh Hawley. It’s not inconceivable that Rubio could be running against all three of these statesmen for President in 2024 – if Trump decides to stay out of the race.

Rubio has been active in Florida politics since the late 1990, getting his start as a member of the West Miami City Commission in 1998. He was then elected to the FL House of Representatives in 2000 (111th district), where he became the 94th Speaker of the House in in 2006.

In 2010, Rubio mounted a bid for a US Senate seat, winning the election in a landslide. Rubio was then reelected to the Senate in 2016 after challenging Trump in the 2016 Presidential primary.

Luckily, the thrashing he took on stage – and at the polls – didn’t harm his brand in the Sunshine State, as Trump more or less made “Little Marco” look like a harmless puppy dog rather than some dangerous RINO turncoat. It’s unclear whether Rubio will run for President in 2024 (especially if The Donald mounts an election bid), but he’s definitely running for reelection to the Senate this November.

The following positions represent the highlights of Rubio’s political career to date, though he has taken on numerous other (albeit lesser) titled roles within the FL House and US Senate over the years.

In general terms, Rubio is a pretty standard Republican. He came up as a sort of Tea Party OG, but he’s drifted toward the center-right since then. Rubio’s not quite a RINO, but he’s definitely to the left of many of the GOP’s more nationally popular politicians.

When Rubio was a young “political rockstar”, there used to be a lot of talk about Marco Rubio vs. Ted Cruz (especially in 2016). But while Rubio was always considered softer and more milquetoast than Cruz, the latter has choked on his own left foot in recent days.

This may slightly increase Rubio’s stock in the 2024 Presidential race with both election bettors and with election voters, but it’s unquestionably made the people of Florida appreciate what they have in the GOP stalwart. Again, Rubio isn’t MAGA, but he’s not too opposed to the Trump brand of politics, either.

Cool your tabloid scandal jets, folks. They’re not having a fling.

Instead, an article from The New York Times with the above title was released in January 2021, speculating on the potential for Ivanka Trump to run against Marco Rubio for his Senate seat in the next US elections (2022).

When was Marco Rubio shirtless? Expand

Recently, very old photos circulated on the internet of a young Marco Rubio performing shirtless with a troupe of dancers in high school.

Marco Rubio was criticized in 2015 for pausing to drink water during a speech.

Apparently, the slurping threw many off the main points the Senator was trying to make.

However, Rubio’s “water thing” was able to be spun positively. Rubio would later make $100,000 for his campaign on water bottle sales alone!

Where can I find the Marco Rubio voting record? Expand

You can find Marco Rubio’s voting record at Vote Smart.

When was Marco Rubio’s arrest? Expand

Marco Rubio was arrested at 18 years old for drinking in a local park after hours. The incident occurred in 1990.

Since then, his record has been scotch free…

What is the issue with Marco Rubio and Huawei? Expand

Marco Rubio recently pushed back against “President” Joe Biden for having approved license applications of Huawei, a Chinese company responsible for much of the world’s smartphone production.

Rubio has called for a blacklist of the company’s affiliate groups due to spying concerns.

Marco Rubio grew up in Miami, Florida, spending the latter half of his adolescence in Las Vegas, Nevada.

Despite growing up Catholic, the move to Nevada caused the family to start attending the Jesus Christ Church of Latter Day Saints.

But this didn’t last, and Rubio remains of the Catholic faith.

What are Marco Rubio’s hobbies? Expand

Marco Rubio isn’t incredibly public when it comes to his non-political interests. However, he is a Miami Dolphins fan for some reason.

What was Marco Rubio’s net worth for 2012? Expand

What is Marco Rubio’s net worth now? Expand

However, many speculate that the Senator has earned far more than that over the course of his career.

Marco Rubio for President, is it real? Expand

While he hasn’t made a formal announcement of his candidacy, there are odds for Marco Rubio to run for President in 2022.

Still, he’ll have to succeed in the 2022 elections if he wants a shot at the Oval Office.

What are Marco Rubio’s pros and cons? Expand

Marco Rubio comes with various pros and cons, but they tend to flip depending on your own political views.

Rubio advocates for border security, anti-abortion policies, and increased trade restrictions on China, which are all hot-button issues.

He used to be.

Marco Rubio won his Senate seat in 2010 with lots of Tea Party support. However, Tea Partiers have since fallen off of the Rubio train as the Senator has moved slowly towards the center right.

No, Marco Rubio is Cuban, not Venezuelan. His parents fled Cuba as refugees in 1956.

Are there books about Marco Rubio? Expand

Yes, there are many books about Marco Rubio! In 2015, he even published his own novel titled American Dreams: Restoring Economic Opportunity for Everyone.

Marco Rubio is an active supporter of the Pro-Life movement and advocates against the practice of abortion in any scenario.

Right now, the only person Marco Rubio is campaigning for is himself.

With the 2022 Midterm Elections coming in hot, the Senator must focus on keeping his seat. However, this could quickly change if Trump announces a Presidential run in 2024.