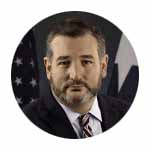 Most Recent Election: US Senator Ted Cruz won reelection to his second term in the upper chamber in 2018, defeating Beto O’Rourke 50.9% to 48.3%.

For bettors and political types, there's no need to introduce Ted Cruz. He's so popular (or infamous) that you'll always find daily lines available on the 2024 Vegas election odds for Ted Cruz, as well as plenty of political prop bets and other fares to hold you over until Cruz’s name pops back up in the circuit sometime in 2023.

Of course, to make informed bets about Ted Cruz' election chances, you should know who he is, what his career looks like, and what he supports.

Rafael Edward Cruz, better known as Ted Cruz, is a sophomore United States Senator from Texas. He first took his seat in the upper chamber after winning the 2012 Senate election by crushing Democratic candidate Paul Sadler by over 1.2 million votes.

In 2018, Cruz’s Senate seat was challenged by Robert Francis “Beto” O’Rourke, who ran on a strong liberal platform. Cruz narrowly defeated O’Rourke 50.9% to 48.3%. This signaled a waning in popularity for Cruz, who – before the age of Donald Trump – was the GOP sweetheart and favorite for the 2016 Presidential election.

In 2016, Cruz saw early primary success but was handily beaten by Trump, and Trump’s Cruz nickname of “Lyin’ Ted” was extremely effective. Whether that designation will continue to temper Cruz’ political outlook remains to be seen. There’s some question whether Cruz will even try to run for POTUS in 2024. Presumably, if Trump runs, Cruz won’t. However, if Trump cedes the GOP torch to FL Gov. Ron DeSantis, Cruz may mount a challenge.

Elected by a landslide to the Senate in 2012, Cruz was actually given a run for his money (and – if you bet on the race – your money) in his 2018 Senate reelection bid. The challenger, former punk rocker and anti-gun heartthrob Robert Francis O’Rourke, adopted the Hispanic-friendly nickname of “Beto” in an effort to make inroads with various Texas demographics, but it ultimately failed.

Since that election – the first after the Senator’s 2016 showdown against Trump on the Presidential stage – Cruz seems to have strengthened his base.

Meanwhile, Beto has aligned himself with the Biden Administration, hoping to catch on as some species of “gun czar,” or something. That alone should end Beta’s upper-level political ambitions in the Lone Star State, and there doesn’t appear to be any legitimate Ted Cruz challenger on the current docket.

Of course, whether Cruz runs for a third term (as the US Senate odds say he should) or tries his hand at another Presidential run in 2024 remains to be seen. In either case, he’s sure to have strong competition, and here’s how Cruz' reelection chances and Cruz' Presidential election chances are trending on the various betting boards as of Q2 2021:

Is It Legal To Bet On Ted Cruz Odds?

Yes! If you live in the US and are at least 18 years of age, you can bet on Ted Cruz' chances to be President (or to win reelection to the Senate) at any legitimate international sports betting site. Unfortunately, domestic United States sportsbooks are not legally allowed to accept political wagers, so even while Sin City advertises Vegas election odds, these are marketing stunts designed to get bettors spending money in traditional sportsbooks and land-based casinos.

However, offshore sportsbooks like those listed here are all safe and legal to use, and each of them posts a selection of election and political odds on all major US and international races, as well as betting on current events in general.

Only the state of Washington disallows online gambling (including election betting), and even though all the top international bookmakers accept members from WA, you’re advised to follow all local gaming mandates.

How To Bet On Ted Cruz Election Odds Online

It’s easy to bet on Senator Ted Cruz at any reputable online sportsbook, and though the lines you’ll see for any given political race or current event odds will differ between sites (always remember to shop lines between multiple sites to find the best values!), the process for signing up at any operator is more or less the same.

Here’s what you’ll need to do if you want to bet on elections and similar lines over the Internet:

Ted Cruz – born Rafael Edward Cruz on December 22, 1970 – is a US politician of Cuban descent. While Cruz was born in Calgary, Canada, he is eligible to serve in any governmental post requiring “natural born” US citizenship, such as President.

Cruz’ family moved to Houston, Texas, from Calgary in 1974. During his high school years, Cruz attended Faith West Academy and Second Baptist High School, graduating from the latter as valedictorian in 1988.

Cruz was active in forensics (aka debate) during this time, earning recognition as “top speaker” for the 1992 US National Debate Championship and the 1992 North American Debating Championship. He also earned Speaker of the Year for these performances, with his team taking Team of the Year honors.

After school, Cruz worked at a private law firm from 1997 to 1998 before joining the George W. Bush Presidential campaign in 1999. When Bush won, Cruz became an Associate Deputy Attorney General (US Justice Department).

Ted Cruz has extensive experience in politics, though most of this came as a result of his debate and private law background. Much of his work was in the capacity of Associate Deputy Attorney General in the Bush Justice Department, and he served from 2003 to 2008 as the 3rd Solicitor General of Texas.

In that time, Cruz argued nine cases before the US Supreme Court (winning five of them), and he wrote 70 US SCOTUS briefs. Cruz’ biggest triumph came in DC vs. Heller, where Cruz represented 31 states in successfully challenging Washington DC’s unconstitutional handgun ban and saw the Supreme Court uphold the “militia” standard as applying to all Americans.

Due to all his success behind the scenes, Cruz finally ran for – and won – elected office in 2012, taking his seat in the US Senate in 2013. Cruz is currently serving his second term as a US Senator from TX.

Before the Trump MAGA era, Cruz was the torchbearer for the Republican Party and a strong polling and betting favorite to become President prior to Trump’s entry into the 2016 race.

In general, Cruz is viewed as “hard right,” focusing on fundamental constitutionalism over mainstream GOP policies. Many critics decry Cruz as a “nationalist,” as he is unapologetically American.

Ted Cruz’ real name is Rafael Edward Cruz, but he started going by “Ted” when he was 13 years old.

You better believe it!

How old is Ted Cruz? Expand

With a December birthday, Ted Cruz will be 53 at the time of the 2024 Senate election and 2024 Presidential election.

Where was Ted Cruz born? Expand

Where is Ted Cruz from? Expand

Ted Cruz was born in Canada but has been a Texas “native” since he was four years old, growing up in Houston.

Where is Ted Cruz’ family from? Expand

Ted Cruz’ mother, Eleanor Elizabeth Wilson, is from Delaware and is of Irish and Italian descent.

Cruz’ father, Rafael, was born in the Canary Islands before immigrating to Cuba as a child. He then moved to TX from Cuba in 1957 and became a naturalized US citizen in 2005.

Where does Ted Cruz live? Expand

When is Ted Cruz up for reelection again? Expand

Ted Cruz is up for reelection in the Senate in November 2024.

However, it is currently unknown whether Cruz will run for President in 2024, which would result in his abandoning a 2024 Senate run should he win the GOP nomination.

Ted Cruz ran for US President in 2016 but was defeated by Donald Trump in the Republican primaries.

It is unknown whether he will run in 2024, though his choice will likely hinge on whether or not Trump makes another bid for the White House.

If Trump or DeSantis run, then probably not.

However, if those two statesmen stay out of the 2024 race, he has a good chance to represent the GOP and take office as the 47th President of the United States of America.

Ted Cruz will only resign as a Senator if he earns the GOP Presidential nomination during the 2023-2024 primary season.

When they were campaigning against each other in 2016, the Trump nickname for Ted Cruz was “Lyin’ Ted.”

Ted Cruz took some manufactured “heat” when he and his family traveled to Cancun, Mexico, during 2021’s Winter Storm Uri, which left many TX residents without power during freezing temperatures.

Is Ted Cruz a Jew? Expand

No, Ted Cruz is not Jewish.

Is Ted Cruz a moron? Expand

Not if you love America.

Does Ted Cruz have a mullet? Expand

How tall is Ted Cruz? Expand

The mainstream #fakenews media tried to smear Ted Cruz by claiming he “left his dog” at home – alone and unattended – while his family went on vacation to Cancun.

The press attempted to claim that Cruz abandoned the dog – comically named Snowflake – to “freeze to death” in Texas.

Of course, that was a lie, as Snowflake was taken care of daily by a dog watcher the entire time.