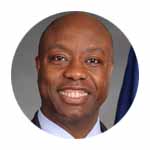 Senator Tim Scott is the highest-profile black Republican in the US Senate, winning his seat in the 2014 special election to replace retiring Senator Jim DeMint. He won again in 2016 to secure his first full term in the upper chamber, and all the best sites with Vegas election odds for Senator Tim Scott indicate that he’s practically a slam dunk to win in 2022.

That said, it’s still early, and anything can happen between now and the Midterm elections. Though Scott has formally declared his intent to run for reelection and has already kicked off his campaign, it’s not out of the question that he could be a potential Presidential candidate or Vice-Presidential pick for 2024 even if he retains his Senate seat in 2022. The top sportsbooks have betting action available on all Senate elections, House elections, Gubernatorial elections, and more!

Sen. Tim Scott waited a long time to declare for reelection, though he stated that if he were to run in the 2022 South Carolina Senate race, it would be his last go-round. Now, he’s all-in and is the heavy favorite to win. But Scott believes in term limits, and most analysts and political observers believe that 2022 will indeed be his last rodeo.

Where he goes from there is anyone’s guess, but Scott is extremely popular in the Republican Party, is a reliable ally of Donald Trump and the MAGA movement, and may have legitimate Presidential or Vice Presidential aspirations in the near term. And, naturally, you can bet on all these outcomes at the best Vegas sportsbooks online.

Scott has declared for the 2022 South Carolina Senate election, and the only other person to mount a bid for the seat on the GOP side is one Timothy Swain. Swain brands himself as a much more committed Trumpist, but Scott has the clout to defeat him. As such, you may not see GOP betting lines for the SC Senate race at too many online books just yet, even as other states already have odds posted.

On the Democratic odds boards for the 2022 SC election, Angela Geter and Krystle Matthews have both thrown their hats in the ring. Neither candidate poses any threat to Scott in the state.

Ever since the “conclusion” of the 2020 general election, Scott has been floated as a potential candidate for POTUS, and he was chosen by the party to rebut Joe Biden’s first address to Congress, which the latter gave in lieu of a much more grueling State of the Union address.

Scott made waves both during and after his speech, solidifying his place as the most popular black Republican in America. Whether he’s interested in parlaying that popularity into a bid for the highest office in the land remains to be seen, but you can probably expect him to abstain if Donald Trump runs for a “third” term.

Is It Legal To Bet On Tim Scott’s Election Chances?

Yes! In the United States, you can legally wager on US elections at all levels of government (as well as other related categories, like election props, resignation odds, current events lines, impeachment bets, press conference lines, and so on). However, despite the fact that Las Vegas sportsbooks advertise such fare, domestic US betting venues cannot accept election/political wagers.

Fortunately, since there are no federal laws barring the pastime with non-domestic operators, you are free to place real-money bets on politics at any site featured here, as they each operate overseas and outside of US jurisdiction.

Note: Washington state has specific laws against all online gambling, but these are evidently not enforced, and all the best online sportsbooks take members from WA. Nevertheless, you are advised to follow all local mandates and bet online only at your own risk.

At the legal online sportsbooks we recommend, betting on elections is simple. All you have to do is spend a few minutes signing up, making a deposit, and browsing the boards.

Many of these sites also have the added advantage of allowing account holders to wager on US and international sports, play real-money online casino games, enter major poker tournaments, and bet the ponies. But as with all betting markets, it’s important that you back the right horse when choosing your site of choice.

To that end, all the operators listed here are legitimate, hold all the necessary credentials to accept wagers from US residents (18+), and have reputations for timely, guaranteed payouts. Here’s how to get started betting politics online:

Scott’s reelection campaign only recently got underway in earnest, but the Senator likely won’t have to raise much in the way of funds to defend his seat. Unlike the 2020 elections for Lindsey Graham and Mitch McConnell, Scott isn’t viewed as remotely vulnerable enough to garner a big-money challenge from the left.

Still, you should expect him to make his customary state-wide stump stops and run some ads on TV and radio.

While a more credible or threatening challenger could make waves down the road, for now, Scott reelection is on cruise control. Below, you can see how Scott performed in his previous Senate elections:

Scott famously entered the political realm as an outspoken virgin, in line with his religious beliefs. But like all politicians, he started screwing people shortly thereafter (depending on which side you ask).

All kidding aside, Scott’s first foray into politics came when he won election to the Charleston City Council in 1995. In total, he’s held the following posts in the state:

In the Senate, Scott became a ranking member of the Senate Aging Committee in 2021, and it’s unclear how high his aspirations go. Lately, Scott has earned the hypocritically “racist” moniker of “Uncle Tim,” largely due to being the GOP speaker selected to rebut Joe Biden’s first address to Congress.

At Presbyterian, he received a partial football scholarship, but Scott’s true field of interest – political science – was where he turned most of his focus. Scott graduated from Charleston Southern University in 1988 with a BS in PoliSci.

Privately, Scott is a successful insurance agent (Tim Scott Allstate), and he continues to have a presence in the insurance industry and the real estate market.

He balanced his time between these markets and politics, getting started in the latter by winning a seat on the Charleston County Council. Scott was the first black Republican elected in SC since the late 1800s.

Scott is currently unmarried and is dedicated to Seacoast Church, an evangelical Protestant institution in Charleston.

Who is Tim Scott? Expand

Tim Scott is the most popular black Republican in the US Senate, where he represents his home state of South Carolina.

Where does Tim Scott live? Expand

Who is Tim Scott’s wife? Expand

Tim Scott has never been married.

What does Tim Scott believe in? Expand

Tim Scott is a bit further right than most rank-and-file establishment Republicans, earning Donald Trump’s “full and total endorsement.” However, he’s not quite a MAGA hardliner.

How long has Tim Scott been in office? Expand

Much to the chagrin of race-baiting Democrats everywhere, Tim Scott is indeed a member of the GOP.

Tim Scott advocates for the JUSTICE Act, which stands for “Just and Unifying Solutions to Invigorate Communities Everywhere.”

While the acronym is pathetic and embarrassing, the Act sought to mandate increased training for police officers, expand the use of bodycams, and bar certain uses of force (such as chokeholds). The Act also emphasized greater scrutiny of officers’ disciplinary histories.

The JUSTICE Act was killed by Democrats in the Senate, of course.

Should I vote Tim Scott? Expand

We can’t and won’t tell you how to vote.

If we lived in SC, we’d probably cast our ballot for Tim Scott, though.

Is Tim Scott an actor? Expand

Yes. All politicians are actors.

That said, Tim Scott shares his moniker with the stage name of the now deceased Tom Harmon (though Harmon was often credited as “Timothy Scott”).

Does Tim Scott have a realty group? Expand

What is Tim Scott’s Net Worth? Expand

In reality, he’s probably somewhere in the middle of the two extremes.

Yes. Tim Scott is both black and a US Senator from South Carolina.

Texas Democrat Gary O’Connor called Tim Scott an “Oreo” and then was forced to resign his post as the Democratic Lamar County Chair.

Amusingly, his resignation was not accepted by his hypocritical leftist cohorts.

Can anyone fact-check Tim Scott? Expand

But if you use a source like Politico, Snopes, FactCheck.org, or any other leftist dumpster fire, don’t expect the actual truth.

What is the relationship between Joy Reid and Tim Scott? Expand

Reid, an irrelevant MSNBC host well known for her race-pimping on-air diatribes, called Scott a “token” and “prop” of the Republican Party.

The so-called Opportunity Zone is a major Trump Administration policy – backed by Scott and other politicians on both sides of the aisle – that addresses alleged class disparity in poor and “underprivileged” communities.

Through tax breaks, the government uses the Opportunity Zone designation to incentivize businesses to build inside these areas and hire/train local help.