2022 Vegas Election Odds For Matthew McConaughey For Governor Of Texas 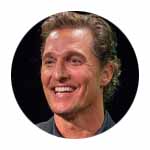 Matthew McConaughey is no stranger to the limelight, as he’s one of the top Hollywood actors in terms of broad-ranging ability. But as you can see, he might be extending himself further than ever – or even a bit too far – with his latest stunt, as there are Matthew McConaughey Vegas election odds posted online regarding his chances to become the next Governor of Texas. GOP incumbent Greg Abbott, of course, is the current favorite, and there are several other potential political candidates to consider, too.

Now, it’s unclear whether McConaughey is actually going to run or simply doing some research for his next big role (perhaps as the protagonist in The Hunt For Red October 2: Orange November), but we’ll all find out soon enough. Naturally, if he runs, that wouldn’t be the biggest surprise. He’s a character actor through and through, often taking roles other actors can’t stomach. And “politician” might be just such a role. For the most part, that’s one the audience can’t stomach, at least.

Well, there’s currently no telling. McConaughey hasn’t officially declared his intentions to challenge TX Gov. Greg Abbott in the next Texas election, but he has hinted his desire to run for the highest seat in his home state.

The following odds are currently available at BetOnline Sportsbook:

Will Greg Abbott be reelected as Texas Governor in 2022?

Note: This is the most up-to-date Texas Governor betting line. The other lines above are archival and have been taken down for now. Expect new TX Governor odds to be posted with updated Matthew McConaughey odds in the near future.

Is It Legal To Bet On Matthew McConaughey’s Governor Chances?

Yes! You can legally wager on politics online – including on Matthew McConaughey’s chances to win the governorship of Texas – at the best Vegas election sportsbooks. These sites are safe, secure, and legal for all US residents to use (18+), and there are no American gambling laws barring access to real-money online betting sites provided those sites are operating outside of US borders.

All the sites we recommend here have been accepting real-money wagers online for years, so they more than fit the (play)bill. Of course, whether or not McConaughey fits is anyone’s guess, which is why – if you pick correctly at the betting boards – you stand to make a mint.

Note: Residents of Washington state are nominally barred from gambling online, though WA betting laws are historically unenforced. Of course, the way things are going, we must recommend that all WA residents abide by state laws and refrain from gambling over the Internet.

How To Bet On Matthew McConaughey For Governor Online

If you’re interested in betting on Matthew McConaughey for Governor, you can only do so at legitimate, trusted overseas sports betting sites. USA-based sportsbooks – while growing in number and available in about half the country – cannot legally accept election bets, but international sites can and do.

Thus, to get in on the action, you must first sign up with one of the trusted gambling sites we recommend.

Regardless of the site you choose, of course, the process is the same. The member portals at these sites are always straightforward and will never daze or confuse you. Plus, if you’re familiar with one, you’re familiar with them all. That’s what we love about these legal Vegas political betting sites, man. We get older, they stay the same age.

Matthew David McConaughey is an American film and television actor. Born in Uvalde, Texas, on Nov. 4, 1969 – there’s a pun in there about the overlap between politics and carnal relations re the taxman and his effect on the taxpayer, but we’ll leave that to the comedy writers – McConaughey was homeschooled early in life. He then attended Longview High School in Longview, TX, before spending a year in Australia as an exchange student in 1988.

In 1989, McConaughey enrolled at the University of Texas at Austin, joined the Delta Tau Delta fraternity, and graduated in 1993 with an aptly named BS in Radio-Television-Film. (McConaughey originally planned to become a lawyer, but he abandoned that line of work for the entertainment industry.)

In the early 1990s, McConaughey got his start in the industry by starring in TV commercials and music videos, breaking into the movies with his heralded role as David Wooderson in Richard Linklater’s 1993 classic, Dazed and Confused.

Since then, McConaughey has starred in countless movies as one of Hollywood’s most recognizable and globally popular leading men, and he’s lent his voice to a bunch of crappy car commercials for some reason. Now, of course, he wants to be Governor of Texas. Maybe.

While Matthew McConaughey has never held political office and thus has no political experience as such, he has a skill set that lends itself to politics. That is, he’s an actor.

McConaughey describes himself thus as he opines on whether or not he should run for office:

“It's just, I'm more of a folk singin’, philosopher, poet-statesman than I am a per-se definitive politician. So I go, ‘Well that's a reason not to,’ but then I go, ‘Oh, well that's exactly why you should. Because politics needs redefinition.’”

Like the man himself, Matthew McConaughey’s politics are somewhat mysterious, as the character actor isn’t all that interested in sharing his genuine beliefs with the world. (This is generally good advice for all Hollywood weirdos, as splitting one’s fanbase is never an economically sound decision.)

McConaughey has described his political leanings as “aggressively centrist.” In realistic terms, he’s a communist dink with sense enough not to say so out loud.

Of course, there are plenty of GOP commies, too. As such, when it comes to Matthew McConaughey, political affiliation is actually a closely guarded secret.

Based on his public utterances, it’s likely that he’d run as a Democrat, but he could conceivably run as an independent candidate in the 2022 Texas Governor’s race. Whether or not that would give a boost to the general third-party odds on the betting boards is anyone’s guess, but no remember: No independent has ever won a meaningful state or national election.

As far as we can tell, these are McConaughey’s main platforms:

Philanthropically, McConaughey runs the just keep livin foundation, which had as its charter the following: “Dedicated to helping teenage kids lead active lives and make healthy choices to become great men and women.”

Unfortunately, to prevent blowback from the various alphabet radicals, this has been recently changed to the more inclusive “Empowering high school students by providing them with the tools to lead active lives and make healthy choices for a better future.”

Who is Matthew McConaughey? Expand

Matthew McConaughey is an American actor known for his roles in classics and blockbusters such as Dazed and Confused (1993), Dallas Buyers Club (2013), and Interstellar (2014).

McConaughey is also a writer, producer, singer, and YouTuber.

Where is Matthew McConaughey from? Expand

Matthew McConaughey was born in Uvalde, Texas, in 1969.

He spent most of his adolescent years in different cities in the state, most notably Longview, TX.

Where did Matthew McConaughey go to high school? Expand

Matthew McConaughey graduated from Longview High School in Texas in 1989.

Where does Matthew McConaughey live? Expand

That’s the worst part of Texas.

How tall is Matthew McConaughey? Expand

Who has Matthew McConaughey dated? Expand

Prior to his current marriage, Matthew McConaughey had three different celebrity girlfriends (as far as we know).

He briefly dated Ashley Judd in the 1990s, then dated Sandra Bullock for about two years after that.

In 2005, he dated Penelope Cruz for just under a year.

Who is Matthew McConaugheys’s wife? Expand

Matthew McConaughey has been married to model Camila Alves since June of 2012.

Does Matthew McConaughey have kids? Expand

Matthew Mcconaughey and Camila Alves have three children together. Their first child was born in 2008, the second one in 2010, and the third in 2012.

Names have been withheld to protect the innocent.

Yes! Matthew McConaughey is a professor at his alma mater, the University of Texas at Austin.

He teaches in the Department of Radio-Television-Film, from which he earned his degree in 1993.

Where did Matthew McConaughey go to college? Expand

Matthew McConaughey attended University of Texas at Austin from 1989 to 1993.

While there, he was also a member of the Delta Tau Delta fraternity.

How much is Matthew McConaughey worth? Expand

Matthew McConaughey is worth approximately $140-$150 million.

Matthew McConaughey has said that he prefers his natural scent to that of deodorant.

We can’t say the same preference goes for his friends and colleagues.

Unlike some of the recent celebrities who came out and said that they don’t shower (at least not daily), Matthew McConaughey has said that he showers multiple times a day.

The practice makes sense given his dedication to being deodorant-free.

Matthew McConaughey, like many Hollywood celebrities, has often avoided “picking a side” of the US political spectrum.

Even so, he claims that he wishes to "balance the ship of

So no. He’s a stinking Democrat.

Why would you want to?

However, if you happen to be lucky enough to take one of his classes, you can probably catch him during office hours.

In March 2021, Matthew McConaughey confirmed that he was considering running for Governor of Texas in 2022.

In October, he was prodded again with the question during an interview.

To those wondering whether or not he’ll actually run, McConaughey said, "I am not – until I am."

It is difficult to imagine that Matthew McConaughey would run for President of the United States, but crazier things have happened.

If all goes well in 2022 with the Governor’s race (and perhaps especially if it doesn’t), there’s a chance he could head straight to the Oval Office in 2024.