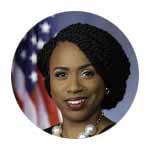 Most Recent Election: Rep. Pressley won reelection in 2020 with 87.3% of the vote, beating her challenger by nearly 75 points.

While her US House odds to win that race were very low, she beat Capuano – a 10-term congressman – in convincing fashion during the 2018 primaries, 59% to 41%. The MA 7th District does not typically field a Republican challenger, and since Capuano dropped out after his primary loss, Pressley won the seat unchallenged.

As a member of “The Squad,” Pressley is primed to be a force (or farce) in the US House for years to come. Thus, the Vegas election odds for US Representative Ayanna Pressley are not going to be about whether or not she wins, but about the margins of her victories.

To learn how to legally bet on all the Ayanna Pressley Vegas odds and props available at legal online election betting sites, our brief Ayanna Pressley bio should give you everything you need to make the best election bets possible and split some wigs at the sportsbooks. (She's bald. That's a bald joke.)

Top Online Sportsbooks With House Of Representatives Odds For 2022

Democratic Representative Ayanna Pressley of Massachusetts (District 7) isn’t likely to generate too much interest among election betting bookmakers or fans, given her apparent untouchable status in the current political climate.

Pressley won her 2020 primary uncontested, and the general election in Massachusetts that saw her elected to her second term in Congress was a mere formality. However, as a member of The Squad, Pressley is an influential congressional candidate and may have an impact on other races in and around the state each election cycle.

Further, it’s conceivable that some Vegas election betting sportsbooks will offer Ayanna Pressley bets in the form of political props, taking action on things like her margin of victory in the 2022 Midterms and similar wagers.

Additionally, given that Pressley reelection is a lock, this certainty could help bettors when placing wagers on the balance of power in the next session of the US House. She could even be influential in the selection of the next Speaker of the House – whether that’s Nancy Pelosi or someone else – should the left retain control in the lower chamber. Of course, according to the current 2022 Democrat betting odds, that's far from a sure thing this time around.

Which Party Will Control The Senate After The 2022 Midterm Election?

Is It Legal To Bet On Ayanna Pressley Vegas Odds?

Yes, it is legal to bet on Vegas odds for Ayana Pressley reelection at any of the reputable overseas betting sites listed here. In the US, domestic sportsbooks are precluded by law and/or tradition from putting up political betting lines, which means the only way to bet on Ayana Pressley or any other candidate, policy, or outcome associated with the 2022 election year is to wager online and offshore.

Only one state actually bars residents from online betting: Washington. However, there is no record of any online gambler from the state being so much as fined for participating, and the laws are apparently unenforced. Still, you are advised to follow all local laws. That’s just good politics!

How To Bet On Ayanna Pressley Reelection

While you’ll have trouble finding US House of Representatives betting lines for Ayanna Pressley Midterm odds specifically, you can wager on all sorts of Vegas-style political odds and election odds at the sportsbooks listed here.

These are the top election gambling sites in the world, and they’ve been taking action on political races and current events issues for years.

In 2020, due to the gravity and magnitude of the Presidential election and its various sideshows (such as Supreme Court odds on Ruth Bader Ginsburg’s replacement and various Presidential debate bets), there were no shortage of moneymaking opportunities at the best election betting sites online. Naturally, we expect more of the same for the 2022 Midterm elections!

While congresspersons never really stop campaigning given their short two-year terms, the 2020 Ayanna Pressley primary campaign was about as nonexistent as it gets, and you can expect more of the same in 2022.

In 2020, Pressley ran for her Massachusetts District 7 seat unopposed, and the results of that race (and the general election after it) show you exactly why Pressley betting odds will be so hard to come by in the future:

The political career of Congresswoman Ayanna Pressley took off almost overnight on the national stage with her upset win in the 2018 House of Representatives primaries. Before earning a position in the US House, Pressley spent nine years as an at-large member of the Boston City Council.

During that time, none of her politics brought national attention to the region in any significant way, though she apparently established herself by earning plenty of local recognition and winning several awards. These include the following:

Who Is Ayanna Pressley?

Ayanna Soyini Pressley, 47, is the current US House representative from Massachusetts’ seventh district. She was elected to the position in 2018 after defeating 10-time incumbent Mike Capuano in a major political upset during the 2018 Democratic House primaries.

Pressley was born in Cincinnati, OH, and raised in Chicago, IL, where she attended the Francis W. Parker School, a prestigious and expensive institution. Pressley, though suffering from alopecia which causes baldness, was a popular student, a member of the cheerleading team, a Planned Parenthood model, a voice-over actress, and a debater. She was voted “Most Likely to be Mayor of Chicago” in her senior year of high school. As a member of the US House, she’s arguably done better than her classmates predicted.

Pressley went on to further schooling at the College of General Studies at Boston University from 1992-1994, but she dropped out without a degree, getting a job at a Boston Marriott to allegedly help support her mother.

Pressley got her start in politics after leaving BU, working for Rep. Joseph P. Kennedy, Jr. In college, she had interned for Kennedy, and she later become a political director and aide to former Senator and Secretary of State John Kerry (2009).

Ayana Pressley’s political platform is considered extreme left, as she is one of the most hardline Progressive Democrats in the Democratic Party. The following list represents just a short sampling of Ayanna Pressley policies:

Currently, Ayanna Pressley has not announced any intention to run for the US Senate, as she has served less than two terms in the US House.

While not her first political post (she was a member of the Boston City Council for nine years, 2010-2019), the Senate trajectory – even for the most popular of House representatives – typically takes establishing oneself in the lower chamber over several dominant election cycles.

As a member of The Squad with fellow hardline Progressives Alexandria Ocasio-Cortez (NY), Ilhan Omar (MN), and Rashida Tlaib (MI), this internal congressional voting bloc is just getting started, and it is unlikely that Pressley will pursue a Senatorial bid for many years.

If you’re looking for US Senate odds on Ayanna Pressley, you’ll have to keep looking. Fortunately, there are plenty of 2022 US House odds and props that feature Pressley and her squad mates to keep Vegas election bettors busy for the foreseeable future.

Who is Ayanna Pressley running against in 2022? Expand

Probably nobody. The outcome will be the same whether she has a challenger or not.

Did Ayanna Pressley win in 2020? Expand

Pressley won her 2020 primary uncontested, and she beat independent candidate Roy Owens with a tally of 86.6% to 12.5% in the November general.

Where was Ayanna Pressley born? Expand

Ayanna Pressley was born on February 3, 1974, in Cincinnati, Ohio. However, Pressley was raised in Chicago, Illinois.

Pressley relocated to Boston to attend Boston University, which she left without a degree due to financial difficulties. Pressley remained in Boston and now represents Massachusetts in the US House.

What nationality is Ayanna Pressley? Expand

Ayanna Pressley is American, born in Cincinnati, OH, and raised in Chicago, IL.

What ethnicity is Ayanna Pressley? Expand

Where did Ayanna Pressley go to school? Expand

Does Ayanna Pressley have a degree? Expand

No. As a college dropout, Ayanna Pressley does not have a formal degree.

Does Ayanna Pressley have alopecia? Expand

When it comes to Ayanna Pressley, hair is an issue that often comes up. Of course, her alopecia condition is part of her identity, and she doesn’t shy away from it.

So if you’re wondering what happened to Ayanna Pressley’s hair, she doesn’t have cancer. She’s just bald.

Pressley typically wears wigs when in the public square, often changing up her ‘do to match her current look.

How old is Ayanna Pressley? Expand

Ayanna Pressley is 47 years old, making her the most senior Squad member in the US House.

Yes. Ayana Pressley is married to husband Conan Harris and has one stepdaughter. The couple have been married since 2014.

Nope! Despite Republicans’ most fervent wishes, Ayanna Pressley is not suffering from anything but alopecia, and that’s not something that will stop her from campaigning or legislating in the years to come.

For any true Progressive in 2020 (and possibly beyond), an Ayanna Pressley endorsement would have been a major shot in the arm, even if a candidate or politician was more established than herself.

As a part of The Squad, the young, hip, next-gen Pressley’s stamp of approval is worth a lot of street cred. That’s why it was such a shocking development when Pressley broke with The Squad and endorsed Elizabeth Warren over Bernie Sanders for President in the 2020 Democratic primaries.

Her rationale, it seems, was to support a fairly Progressive fellow Massachusetts pol, who – by the way – had a more realistic shot at earning the nomination than Bernie did (had the party actually put any weight behind either candidate instead of going all-in for Creepy Joe Biden and a bunch of Dominion voting machines, which rather obviates the entire premise, but whatever).

However, some analysts believe that offering an endorsement to Warren was a signal of Pressley’s Senatorial ambitions, which – while likely to exist to some degree – are still premature.