Vegas Election Odds For Andrew Giuliani to be Elected Governor 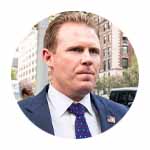 Rudy Giuliani is a household name and a popular Republican and MAGA figure. He’s remembered for his efforts as NYC mayor from 1994-2001, spearheading the response to the 9/11 terrorist attacks, and his alliance with President Donald Trump. His son Andrew, however, barely registers on the national stage. Nevertheless, politics is about who you know, and that means there are plenty of Vegas election odds for Andrew Giuliani on the political candidate betting boards.

Giuliani the Lesser hasn’t made waves in politics to date, but he recently announced his intention to run for Governor of New York. Clearly, he intends to capitalize on his father’s popularity in the state and with the GOP, though it remains to be seen how far that association can go. Though not considered a particularly credible candidate, if the last few years have taught us anything, it’s to expect the unexpected.

Giuliani – at just 35 years old – previously flirted with the idea for challenging NYC mayor Bill de Blasio for his post, but he put those plans on the backburner and instead announced that he would be running for governor of the state in 2022.

Current NY governor Andrew Cuomo is juggling accusations of COVID profiteering, pandemic mismanagement, and multiple sexual abuse and harassment allegations. And although he’s the favorite to win reelection in New York, Giuliani seems to believe he can take down the petty kingpin.

It’s unlikely, of course, and the best online Vegas election sportsbooks all agree that Giuliani is a long shot at best. The lines for NY governor odds come and go at all the top sites, so be sure to bookmark this page to get your bets in as soon as they’re available. Needless to say, if you bet on Andrew Giuliani’s chances to win and he’s actually elected, you stand to make a US mint!

The following lines are currently live for various state gubernatorial elections. In addition to these, the best sportsbooks also offer a host of political prop bets, 2022 Midterm House of Representative odds for both Democrats and Republicans, US Senate odds, balance of power odds, and even international political lines for various elections across the pond.

And, naturally, you can get plenty of 2024 Presidential election odds, Trump odds, indictment odds, Biden impeachment odds, and a whole lot more. If it’s a political race or a current events issue, chances are, you can bet on it. But remember, domestic US sportsbooks can’t legally offer political betting lines.

If you want to vote with your wallet, you can only do that with the legal international online sports betting sites featured here.

Is It Legal To Bet On Andrew Giuliani Election Odds?

Yes! If you live in the United States, you can legally and safely bet on the Andrew Giuliani chances to take the top seat in New York, along with all the other political fare you expect – and probably a lot more stuff you don’t! However, because domestic sportsbooks are legally precluded from offering these kinds of wagers, you can only bet on them via reputable offshore betting sites.

Vegas is always posting election odds, but these are just “theoretical” lines to whet your whistle so you’ll wager on sports in their books. Offshore, you get Vegas-style odds on all the intrigue you can handle, and if you want to turn that handle, the services we recommend are the best and most established in the industry.

Exception: Residents of Washington are not legally allowed to gamble online, but the state’s laws are apparently unenforced. That said, if you want to be a scofflaw and bet politics while living in WA, you must proceed only at your own risk.

How To Bet On Andrew Giuliani Election Odds Online

We’re not sure why you’d want to, but if you’re going to put some cash on Giuliani’s chances to become the next New York governor, the process is actually pretty easy. Here’s what you’ll need to do:

Giuliani doesn’t have a great deal of political experience, though he spent some time working in the Trump administration’s Office of Public Liaison before becoming Special Assistant to the President. Also, he plays a lot of golf.

Whether or not that’s going to be enough to build a solid NY gubernatorial campaign is anyone’s guess, but the wildcard is, of course, his last name. He’s also a weird, toothy ginger, which is something else to consider.

Once the Giuliani campaign gets underway in earnest (the election’s still a long way out), we’ll update this page with more germane information useful to all the politics bettors out there.

There’s not much to write home about when it comes to the political career of Andrew Giuliani, as it’s been fairly nonexistent. Certainly, he was exposed to many of the inner workings of New York politics by his father, but he’s never held elected office. And being elected to a governorship right out of the gate – especially at just 36 (which is how old he’ll be on Election Day in 2022) – is a pretty big ask.

He’s not a celebrity, has very little face recognition, and hasn’t made much of a mark in terms of policy matters that actually matter to his constituency. That said, he’s played golf with Trump and Tiger Woods, dated an Olympic gold medalist, and seems to have lived a typical trust fund lifestyle. He knows people, but that might not be enough.

Andrew Harold Giuliani was born on January 30, 1986, in New York City, NY, to parents Rudy Giuliani and Donna Hanover. After his parents were divorced in 2002, Andrew lived with his mother, graduating from Saint Joseph Regional High School (Montvale, NJ) in 2005. He then went to Duke University, where he studied various disciplines before earning a BA in something or other.

Of course, his real passion while in college was golf. He’d lettered in the sport all four years during high school, and he played for Duke for several semesters before being cut in 2008 as a junior. The school cited disciplinary issues, but Giuliani sued, claiming the assertions were fabrications and that all he did was throw an apple at a teammate once. The lawsuit was dismissed in 2010.

In 2009, Giuliani became a golf pro, winning the Metropolitan Open before winning several other minor tournaments. During the Trump administration, Giuliani was said to have been The Donald’s “most regular playing partner.”

Who is Andrew Giuliani? Expand

Andrew Giuliani is the son of Rudy Giuliani and is a former pro golfer and political advisor under the Trump administration.

Who is Andrew Giuliani’s dad? Expand

What does Andrew Giuliani do for a living? Expand

Giuliani played some pro golf, was on a reality TV show about golf, and was an assistant to the President during Trump’s first term, where he played even more golf.

Does Andrew Giuliani work at the White House? Expand

However, from 2017-2021, Giuliani served in the Trump administration, first in the Office of Public Liaison and then as Special Assistant to the President.

Andrew Giuliani is a golfer, and he’s played for his whole life, even at the professional level.

It is unclear whether he will continue to play competitively as he transitions to politics, though he recently started the process to reestablish his amateur status.

Who is Andrew Giuliani’s wife? Expand

How much is Andrew Giuliani worth? Expand

Andrew Giuliani’s net worth is allegedly between $2 million and $4 million.

If you bet on him to win the NY gubernatorial election and he actually does, you could be worth that much, too.

Well, not really, given the betting limits. But still!

Probably not, but anything’s possible!

Should I bet on Andrew Giuliani’s chances to become New York governor? Expand

He’s a longshot, to be sure, but the payout would be incredible.

You can make a small bet here and won’t miss the money if you lose, while you’d win a ton on the off chance that Giuliani ends up in NY’s highest office.