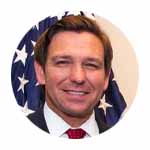 Ronald Dion DeSantis, better known as Ron DeSantis, is currently serving as the 46th Governor of Florida. Having narrowly defeated Andrew Gillum in the 2018 FL gubernatorial election, Florida dodged one of the biggest bullets of all time, while DeSantis’ own trajectory is less bullet and more rocket ship.

At just 40 years old, DeSantis won his seat as FL governor, and his star has only gotten brighter thanks to his Donald Trump-like demeanor with the mainstream media and his bucking of trends during the 2020 coronavirus “pandemic.”

In short, DeSantis is the most popular Republican politician not named Donald Trump, and he’s quickly building up his own brand of MAGA populism in line with the “former” POTUS’ America First platform.

While there has been no DeSantis announcement on whether or not the American statesman will be running for President in 2024, The Ronald is currently trending right behind The Donald atop the Vegas election odds boards for the Republican Party Presidential nomination.

Currently, it’s presumed that Governor Ron DeSantis will run for reelection in the Sunshine State in 2022. However, given Ron DeSantis’ popularity and the DeSantis approval rating in FL and around the country, he may forego part of his second four-year term (if he wins) to put his hat in the ring for the presidency in 2024.

This, of course, presumes that Trump won’t run, and with the Trump odds being what they are, that’s unlikely. As you can see, here’s how the two stack up against the field across the odds boards:

Is It Legal To Bet On DeSantis Odds?

Yes, it is legal to bet on Governor betting odds for DeSantis, but you can only find real-money betting lines on his chances to win the 2024 FL gubernatorial election and the 2024 US Presidential election at international sportsbooks that operate outside of America. Despite Las Vegas bookmakers advertising political betting lines, they can’t actually accept wagers on politics, current events, or entertainment markets.

Fortunately, offshore election betting sites are safe and legal to use, and there are no federal laws barring US residents aged 18 and up from gambling with such operators. That said, one state – Washington – has current laws outlawing all online gambling, including online sports betting. And even though the best Vegas election betting sites accept members from WA, if you live in the state, you’re advised to follow all local gaming mandates.

How To Bet On Ron DeSantis Odds Online

Florida Governor Ron DeSantis is a hugely popular figure in politics despite his young age. If he runs for President in 2024 and wins, he would take office at just 45 years old. That would make him the third youngest US President in history, behind only Teddy Roosevelt (42) and John F. Kennedy (43).

Of course, age ain’t nothin’ but a number, and all the best online sportsbooks allow members to bet real money on US politics at just 18 and up. But for potential bettors, it’s not enough to know that they can bet on politics online, they also need to know how to bet on politics online. Luckily, the process is simple:

Please keep in mind that when you sign up for an online sports betting bonus, the terms and conditions require you to bet a certain multiple of your deposit + bonus amount. Most bettors gamble on politics and traditional sports frequently, making these bonus rollover requirements easy to meet.

We recommend that all regular bettors take online sportsbook promos whenever they’re offered, as these offer players literal free money. Just remember to pay your taxes when you win!

Ron DeSantis Bio – Who Is DeSantis?

Who is Ron DeSantis? That’s like asking “Who is John Galt?” All kidding and literary analogy aside, Ronald Dion DeSantis is an American politician currently serving as the 46th Florida Governor. Elected at just 40 years old, DeSantis burst onto the scene with real momentum.

Before becoming governor, DeSantis had limited experience holding elected office. Born September 14, 1978, in Jacksonville, FL, DeSantis attended Dunedin High School, graduating in 1997. From there, he received a BA in history from Yale before attending Harvard and receiving his JD in 2005.

While attending school, DeSantis taught history at Darlington School (2001-2002), and after graduating, he worked as a federal prosecutor and JAG officer in the US Navy (2005-2007). DeSantis then served as an Assistant US Attorney from 2008-2010 before winning a seat in the US House of Representatives (FL-6) in 2012.

He served most of three terms in the House before running for Governor in 2018 and narrowly beating Democratic challenger and former Tallahassee mayor, Andrew Gillum (who has since been thoroughly disgraced). DeSantis beat Gillum by a 0.4% margin, earning 32,463 more votes than the DNC darling.

In the years since he was elected Governor, DeSantis has solidified his position as the heir apparent to Donald Trump and the MAGA movement. He did this through a series of responses during the American COVID crisis, bucking national trends and keeping Florida more or less open while many blue states closed up shop and put millions of residents out of business.

The naysayers and leftist fear mongers in the mainstream media all demonized Gov. DeSantis and claimed that DeSantis was dooming the state and risking the deaths of the countless seniors that call FL home. Despite this, the state maintained low Coronavirus death rates even as various DeSantis orders were issued to reopen the state.

Ron DeSantis is married to Emmy Award-winner Casey DeSantis, and the two have three children together: Mason, Madison, and Mamie.

Ron DeSantis had limited political experience before becoming Governor of FL, with his sole elected post being that of a US House Representative from Florida’s 6th district (2013-2018). He gave up his seat during his third term in the House to run for Governor in 2018.

Since then, DeSantis has solidified his place as the most popular GOP politician this side of Donald J. Trump. DeSantis is considered to align strongly with Trump, and there are rumors that Trump is considering the popular governor as his Vice Presidential candidate for 2024 (if he decides to run).

While many pundits claim that Trump’s COVID response was one of the primary reasons he lost, DeSantis’ COVID response – taking the same queues from Trump – has contributed bigly to his political power.

Most of Ron DeSantis’ politics can be defined by Trump’s MAGA movement, as no other national politician more closely aligns with the 45th President of the United States. In general, DeSantis holds the following political positions on issues of party import:

How old is Ron DeSantis? Expand

Ron DeSantis’ age is one of the most shocking things about the politician, given his national prominence.

You can also email Gov. DeSantis at GovernorRon.DeSantis@eog.myflorida.com.

What’s the deal with the DeSantis phone call? Expand

One of the great “scandals” of the DeSantis era in FL was an alleged call to Joe Biden wherein DeSantis, to Biden, told the latter to “go fuck yourself.”

Except, as usual, the DeSantis “go fuck yourself” call never happened.

Even leftist “fact checking” outlet Snopes debunked this one.

What did Rush Limbaugh say about Ron DeSantis? Expand

While the Ron DeSantis-Rush Limbaugh relationship was necessarily short given the popular host’s death in February 2021, the legendary talker was a big fan of the Florida Governor.

Per DeSantis, on his 2018 gubernatorial campaign:

“He had me on when I was running for Governor. I was getting the tar kicked out of me every day and he had me on the week before the election in 2018. He didn’t have a lot of guests. I was honored to be on his show a couple of times.”

DeSantis has called Limbaugh “the Babe Ruth of radio.”

When is DeSantis up for reelection? Expand

Ron DeSantis is up for reelection as FL Governor in 2022.

Florida Governors serve four-year terms and can only serve for two full terms under the state constitution.

How tall is Ron DeSantis? Expand

What ethnicity is DeSantis? Expand

Where does Ron DeSantis live? Expand

Was Ron DeSantis in the military? Expand

What is Ron DeSantis’ nationality? Expand

What position is Ron DeSantis running for? Expand

In 2022, Ron DeSantis will presumably be running for reelection as Governor of Florida.

Why is Ron DeSantis bad? Expand

If you’re wondering why Ron DeSantis is bad, you’re watching too much CNN.

DeSantis is a Trump-like bogeyman to the left, but he has the reputation of putting America – and American values – first.

In the House, DeSantis voted to raise the social security age to 70. He did not vote to cut Social Security or Medicare, despite claims to that effect by his political rivals.

Ron DeSantis’ sister Christina died in 2015 at the age of 30. She passed away from complications of a blood clot.

How much is Ron DeSantis worth? Expand

No. Ron DeSantis has an Italian background.

Yes. However, it is unknown whether or not DeSantis would run against Trump for President in 2024 if the latter chooses to mount another go at the White House.

How many votes did Ron DeSantis win by? Expand

No. Ron DeSantis’ family hails from Italy on his father’s side.

Is Ron DeSantis a Christian? Expand

No. Ron DeSantis is a Christian and practices Roman Catholicism.

Is Ron DeSantis a millionaire? Expand

No. Ron DeSantis is not related to Rexall Sundown founder Carl DeSantis.

If he runs for President in 2024, the DeSantis running mate is anyone’s guess, but you can be sure there’ll be Vegas election odds on his pick.

He did, however, ask FL voters not to “monkey this up,” referring to the 2018 FL gubernatorial election.

And that, it turns out, was good advice, given the fact that Gillum’s political career is in tatters after he OD’d in a hotel and was photographed naked in a puddle of his own vomit by a male prostitute he hired.